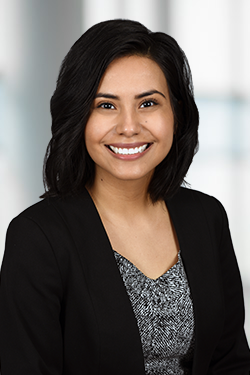 Michelle Vianney Beltran is an associate attorney at Gonzalez Olivieri, LLC in the Waivers department. Prior to joining the team, Attorney Beltran worked two-years as a law clerk for the firm. She learned essential aspects of the immigration process through the firm’s Asylum, Appeals, Waivers, and U-Visa departments.

Attorney Beltran received her Bachelor of Arts in English, with an emphasis in Literary Studies and a minor in Criminal Justice, at Texas A&M University-Corpus Christi. She was an invited member of Sigma Tau Delta, an internationally recognized English Honor Society, and was nominated for a Haas Writing Award, which recognizes the university’s best student writers. Before attending law school, Attorney Beltran also received her Master of Arts in English, with an emphasis in Literature and Cultural Studies, from The University of Texas-Pan American.

Attorney Beltran most recently received her Juris Doctor from South Texas College of Law Houston. During law school, Attorney Beltran participated in the civil practice division of the renowned Randall O. Sorrels Legal Clinics, assisting Veteran clients with Veterans Benefits Administration claims, discharge updates, and other legal issues related to their military service. Furthermore, due to her passion for animal welfare, Attorney Beltran was also a member of the Animal Defense Fund—STCL Houston Chapter, where she partook in the first Animal Law Clinic offered in the state of Texas and — in response to the devastation caused by Hurricane Harvey —helped draft a comprehensive natural disaster manual.