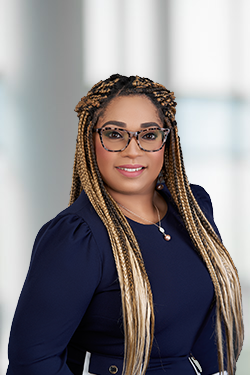 Soismary Vals is an Attorney at Law with a passion for defending human rights, justice, and equality for all.

Years later, attorney Vals had an experience with a young immigrant that changed her life forever. In particular, when she was a substitute teacher in Texas, she had the opportunity to help a hispanic immigrant girl, as her assistant and translator. She and her mother applied for asylum as a relief from removal and faced numerous barriers in seeking legal services. After realizing their situation, Ms. Vals volunteered her time to assist them through the process, but at the same time she felt frustrated she couldn’t do more. It was this experience that inspired her to enter law school, and to specialize in the field of immigration law, helping non-citizens immigrate to the United States.

She was subsequently admitted to the Pontifical Catholic University of Puerto Rico-Law School, where she earned her Juris Doctor in June 2020, and she graduated with honors Summa Cum Laude. Attorney Vals was admitted to the Puerto Rico State bar in 2021. While in law school, she had the opportunity to conduct her legal clinic at the Supreme Court of Puerto Rico, where she served as a law clerk to Justice Edgardo Rivera García. She also worked as a public defender in Puerto Rico as part of her law school criminal legal clinic. Both experiences were essential for lawyer Vals to efficiently develop her knowledge and skills in litigation techniques.

As a law student, she always distinguished himself by her leadership qualities. She directed the Puerto Rico Lawyers Association and a musical group called VOCES, which allowed her to actively participate in activities for the benefit of the student community. Since entering law school, she sought to learn as much as possible about immigration law. Attorney Vals has taken a substantive Immigration and Citizenship Law course, as well as an advocacy workshop concerning litigation skills for cases brought before the U.S. Citizenship and Immigration Service, the Immigration Courts, the Board of Immigration Appeals, and the Federal Court of Appeals.  Also, along other students, she has collaborated to establishment a Student’s Immigration Association in her law school. Additionally, her immigration law experience began at the School’s Immigration Internship, where she represented indigent immigrants in the South Texas Pro Bono Asylum Representation Project (ProBAR).

Mrs. Vals speaks Spanish and English as well.  She loves the culinary arts, and she is a pet lover. Also, she enjoys sing music, travel, and getting to know other cultures.