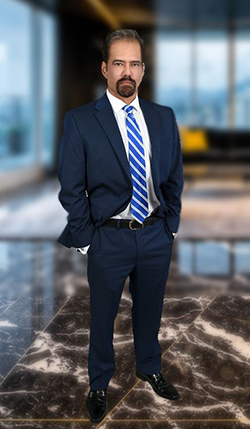 He has served as an immigration law practitioner for almost twenty-five-years and is eligible to practice in the Southern District of Texas Federal Courts, as well as in the 1st, 2nd, 3rd, 5th, 6th, 9th, and 11th U.S. Circuit Courts of Appeal, as well as in the Supreme Court of the United States.

Mr. Gonzalez is recognized as an outstanding immigration litigator and advocate in the U.S., and his opinions are respected and trusted in the legal community. Recently, he won a groundbreaking victory at the Fifth Circuit in Rodriguez v. Garland, 15 F. 4th 351 (5th Cir. 2021), where the Court recognized for the first time that a noncitizen who is issued a Notice to Appear failing to contain the date and time of the noncitizen’s hearing, cannot be ordered removed in the noncitizen’s absence, since such an individual never received valid statutory notice under U.S. immigration law. The Fifth Circuit’s decision in Rodriguez has been heralded by immigration advocates nation-wide as a substantial win for noncitizens seeking to legalize their status so they can remain in America with their families.

In addition, attorney Gonzalez has served as expert on immigration cases on many matters including disciplinary proceedings on behalf of the State Bar of Texas. He has participated in and has also organized the State Bar of Texas’ Conference on Immigration Law 101 for the year 2012, and the 2013 Texas bar Conference, the 2013 American Immigration Lawyers Association (“AILA”) Texas Chapter Immigration Conference on South Padre Island, the University of Texas Conference in 2014, the AILA Playa del Carmen 2014, and the AILA 2015 Fall Conference in Minneapolis. Mr. Gonzalez has also been featured in Who’s Who in American Immigration Law, Who’s Who in America, Telemundo, Univision, and the New York Times after successfully representing Kevin Cassasola, the Honduran migrant child portrayed in the Oscar nominated HBO documentary “Which Way Home.”

Mr. Gonzalez has been a frequent contributor to  the Houston Chronicle and for his efforts with AILA in supporting comprehensive immigration reform he was featured and interviewed by July Banderas as an expert on  immigration on Fox News America’s News Headquarters, on Greta Van Susteren’s On the Record, and on Judge Jeanine Pirro’s Justice, as well as many more national and international media events.

Attorney Gonzalez’s work for his community extends well-beyond his private practice. He and his staff frequently volunteer their time to assist with planning and hosting community citizenship drives, DACA forums, and law enforcement-public forums. At these events, Mr. Gonzalez’s trained, professional staff-members educate and help volunteers to fill out immigration applications, and the firm’s attorneys provide legal assistance with more complicated cases by giving free consultations. Additionally, in his zealous advocacy for the rights of all immigrants, attorney Gonzalez also provides a myriad of services and assistance to Catholic Charities, the Tahirih Justice Center, FIEL (Familias de Inmigrantes en la Lucha), FLAS, INC. (Fundación Latino Americana De Acción Social) and many other non-profit organizations dedicated to bettering the greater-Houston area. Mr. Gonzalez’s tireless devotion ensures that each and every one of his clients gets their fair day in court.