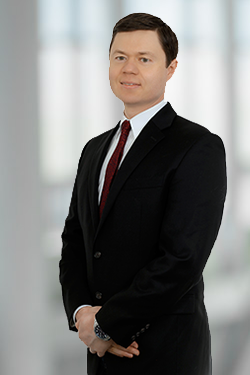 Alexandre A. Afanassiev is an experienced litigator who has represented individuals, families and businesses in all aspects of immigration law, from Immigration Court to the U.S. Supreme Court.  He has helped asylum seekers, people who are seeking legal status, foreign workers on non-immigrant visas, and Lawful Permanent Residents living in the United States and threatened with having their green cards taken away.

Mr. Afanassiev intimately understands what it means to be foreign-born because he is from Russia and initially came to Houston as a foreign student. His experience in immigration law began at the University of Houston Law Center, where he was a student-attorney at the school’s immigration law clinic.  There he dived into the field and found great satisfaction helping indigent clients and battered spouses seek asylum or protection from deportation.  This experience has determined his future in legal profession as an immigration attorney.

Board Certified by the Texas Board of Legal Specialization in Immigration and Nationality Law, Mr. Afanassiev also serves on the board’s Exam Commission.  In addition, he is a member of the American Immigration Lawyer Association.

One of his noteworthy successes was the appeal of an immigration case to the U.S. Supreme Court in Alexis v. Holder, 09-955 (2010), which he ultimately won in collaboration with his colleagues, allowing his client to return back to the United States after being deported away from his family.

Mr. Afanassiev has been selected to the Texas Rising Stars list from 2013-2015 and Texas Super Lawyer list from 2015-2016. Honorees are chosen by Thomson Reuters’ legal division and comprise a very small percentage of Texas lawyers.

Mr. Afanassiev has been a guest lecturer at the South Texas College of Law, Federal Litigation and Immigration Law Class, and at the University of Houston Law Center Immigration Clinic Class.  He has been a co-panelist at American Immigration Lawyer Association national conventions and Texas chapter conferences, as well as at State Bar of Texas CLE seminars.  He has spoken on a variety of topics including the representation of clients seeking protection under the Violence Against Women Act, seeking waivers on grounds of inadmissibility, litigating waivers under the Adam Walsh Act, motion practice before the Executive Office for Immigration Review, and on immigration consequences of criminal convictions.