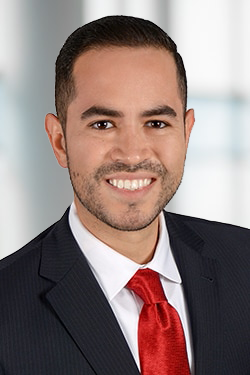 Daniel A. Ottaviano is originally born in Santa Cruz, Bolivia and moved to the United States with his family when he about three years old. He received his Bachelor’s degree from the University of Texas at Austin. After graduating in 2004, he began working as a legal assistant for Granger, Mueller & Wood, PC, a local criminal defense firm in downtown Austin. For the next three years, he visited numerous clients in criminal detention, helping them get released on bond, as well as helping the attorneys with motions, trial preparation, and translating for Spanish-speaking clients. Working intimately in the criminal justice process cemented Daniel’s desire to attend law school, and he did so in 2007 at Thomas M. Cooley Law School in Grand Rapids, Michigan.  While there, Daniel concentrated in and focused on litigation and volunteered in various inter- and intra-school Mock Trial and Moot Court competitions, even being the Chair of the Mock Trial Board at his campus during his final year of law school.

While in law school, Daniel also participated in various legal clinics, including the Michigan Migrant Legal Assistance Project.  It was while volunteering at MMLAP that he first developed a sense of helping immigrant families obtain fair and proper legal help and representation. After receiving his Juris Doctor degree in 2010, Daniel began practicing immigration law in Houston, TX after passing the February 2011 Bar Exam. Since then, Daniel has litigated hundreds of immigration and nationality law cases. He has conducted numerous Master Calendar, Individual and trial hearings in both detained and non-detained federal immigration court. Daniel has also helped many people in obtaining their lawful permanent residence and U.S. citizenship, including his siblings, with USCIS.

Before Daniel joined the Gonzalez Olivieri, LLC team in 2016, he had his own immigration law practice in Austin, TX from and helped Gonzalez Olivieri, LLC in covering hearings and USCIS interviews in the San Antonio and Central Texas area. Daniel is a Swiss Army knife in terms of being able to handle all kinds of different and complicated immigration matters. We are proud to have him on our team.