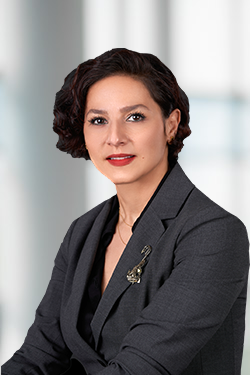 Fatima Bachir is an Attorney at Law with a passion for justice, equity, and a belief that families belong together. She is a dedicated professional and a member of the Gonzalez Olivieri L.L.C. team in the Waivers and Consular Processing Department. She is licensed to practice law in the State of New York.

Born and raised in Beirut, Lebanon, Attorney Fatima Bachir attended Beirut Arab University, where she obtained her “License En Droit”/Juris Doctor degree. She worked for several years as an in-house counsel and Deputy Head of the Judicial Department for one of Lebanon’s top five commercial banks before migrating to the United States. She earned her L.L.M. degree from the University of Houston and is a proud alumna of the University of Houston Immigration Clinic, where her passion for helping immigrants started to shape.

Fatima speaks Arabic, and she is proficient in French. She cherishes time with her family and attends kickboxing classes in her free time.