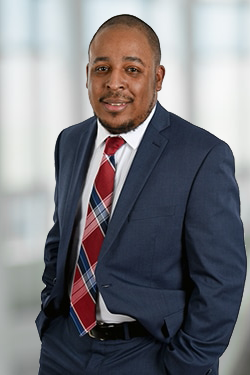 Mr. Brown joined Gonzalez Olivieri LLC as a law clerk shortly after law school. Mr. Brown graduated in May 2016 with a JD from the University of Toledo College of Law in 2016. During law school, Mr. Brown was quite involved and a member of various student organizations, including the Labor & Employment Law Association, Black Law Student Association, and Christian Legal Society. He also participated in Moot Court on the constitutional law team for two consecutive years and competed in competitions. Mr. Brown was a semi-finalist in the Charles W. Fornoff Appellate Advocacy Competition.

During law school, Mr. Brown served as a Judicial Intern for the Honorable James Carr in the United States District Court for the Northern District of Ohio. He also worked for the Honorable Myron Duhart in the Lucas County Court of Common Pleas. He also interned at the Ohio Attorney General’s Office in the Civil Rights Division and at the Toledo Fair Housing Center. Mr. Brown is a firm advocate for social justice. He sees working in behalf of poor, vulnerable, and disenfranchised populations as his vocation, or calling.

A native Houstonian, Mr. Brown, earned his B.A. in Theology from the University of St. Thomas in 2009. In his free time, Mr. Brown enjoys intellectual pursuits, political advocacy, binge-watching TV series, socializing, and being active in his parish.